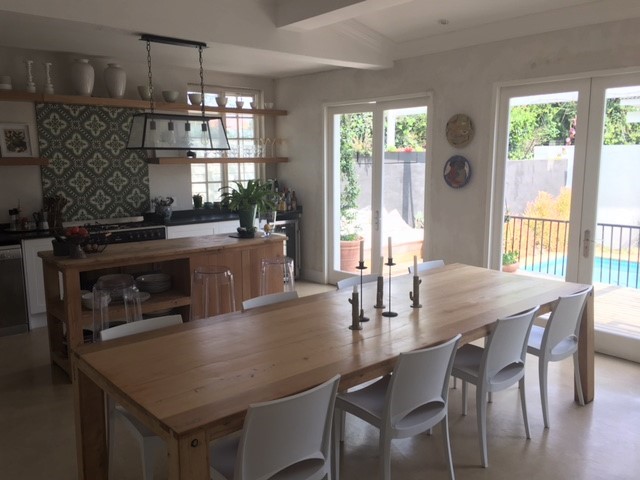 There is a reason I love building new houses from scratch – renovations are hard!

Firstly, the main reason you’re probably renovating in the first place is because the house is old, dead old. You bump the wall and a handful of plaster breaks off. You open the electrical DB board and a family of mice jump out. The roof, well, the roof is always bad.

Our first Johannesburg house was meant to be a quick flip while we settled in. I had set my heart on the green, leafy inner suburbs, close to some of Jozi’s best schools and we had two days to hunt.

We bought the lowest priced house in the best location. It stood out because it presented so many obvious avenues of improvement. On the positive side, it had high ceilings (non-negotiable) and some charming bay windows. Knock down this wall, take out that outbuilding, extend the garden here and voila!

The only thing that’s worse than a very old house, is a very old house that’s had a bad renovation in the eighties. And I can safely say that the one thing this is likely to present is uneven, incomprehensible floor levels.

Chipping out a wall is one thing. Chipping out all the floor and wall tiles and the screed underneath is another. Replacing all the flooring in an entire house is not a cheap exercise. Especially if you have an iffy aversion to cheap tiles.

We sold the house two years later and the expensive renovation and bad property market came back to bite us. Lessons learnt. It was time to build a new house again and we’d already spotted a little subdivision plot that we set our hearts on. Forward and beyond!

Creating one large kitchen/diner is always going to be a winner. Add the sun filled French doors and a sparkling, aqua pool just beyond and you have a revitalized house.

Old style houses allow you to get away with ‘shabby chic’ aesthetic. Cans of white paint can work wonders – house and furniture.

The flooring was time consuming and expensive. Add the project manager getting some of the new floor levels wrong and it becomes an even bigger nightmare.

First time I used a laminate ‘wood’ floor, and probably the last. It just does not compare to the real deal oak floor I laid in the lounge. The feel, sound and finishes were a daily reminder of ‘goedkoop is duur koop’.

Now add all the new electrical points and plumbing changes. There is no such thing as just a patch. The only way to do it properly is to re-plaster, prime and paint the whole wall. Expensive and messy.

Cottage pane windows, never again! Nightmare to clean, repaint (especially if a previous owner did it so badly half the varnish is on the glass, and dusty.

The Johannesburg housing market was not as kind as Cape Town and this renovation ended up costing more than we planned. Happy to sell and move onto another new build project.