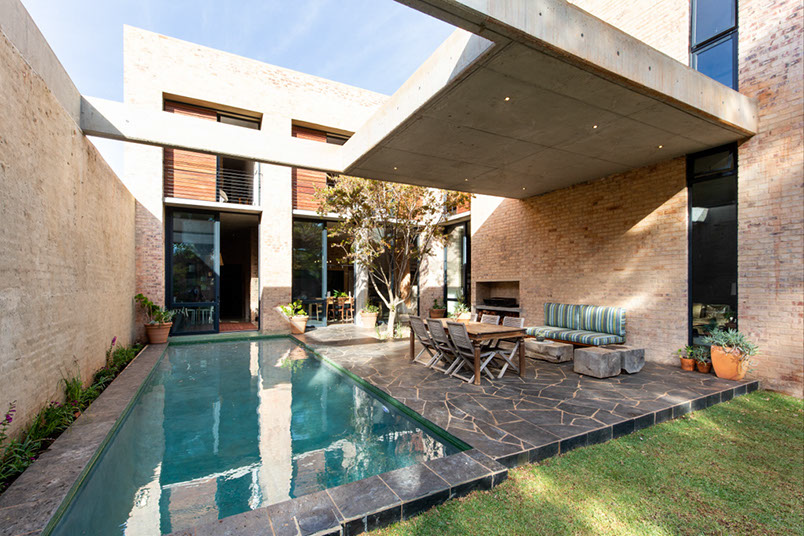 After a frustrating renovation, nothing beats the clean, fresh canvas that is an empty stand.

Now that we’d chosen the inner hub of the city, open land was not that readily available – unless it came up in the form of a subdivision. In this case, we bought an old tennis court.

The plot was basically 20x40m big, but once you put some dimensions to paper, it’s always surprising to see what can actually fit in with a clever design. Sadly, this part of the world has very little views, so I decided on a much more enclosed, inward looking design. Again, it’s important to note that this would only work if you embraced the north aspect of the stand.

Happily, I could fully embrace the large, heavy proportions I love so much and have gloriously high ceilings. My Johannesburg architect had some experience in this, but even he thought my ceilings were too high!

This stand was so easily accessible, dead flat and simple to build on compared to our previous projects, that I expected this build to be a breeze. Alas, it was not to be.

Bad recommendations from our bank and builder meant we entered an administrative nightmare, just when we thought we knew all there was to the building process.

Long story short, we had to do an NHBRC Late Enrollment on behalf of our builder. We paid a hefty price in fees, time and lab tests. Murphy’s Law, this whole mess also developed just before the builders’ holiday, which meant extra delays.

We did manage to finally pull it off, although I ended up project managing the last month entirely on my own – but it was actually a relief to be in control again.

After the extra fees, time delays and extra foundations needed, the house cost about 10% more than planned (and would have been more if not for drastic cuts in finishes), but still worth it in the end. There is always a period of stress one has to get through before you can learn to love a new house completely.

I found a fantastic architect that was a pleasure to work with and went above and beyond what is expected as he was only contracted for the design. Having a good working relationship with a professional that is equally inspired by the house was really fun.

I really missed my Cape Town building contractor. As it was my first new build in Gauteng, I decided to go with a project manager that was familiar with the local industry and could suggest subcontractors.

Unfortunately, I was generally frustrated from the beginning and although we made it through, it was touch and go. I would never go the route of project manager again unless the contracted person is there full time or has a foreman that holds authority on site and can speak English.

Red tape. Lots and lots of it.

As our most recent project, I learnt that one still learns on every build. What does become easier is knowing your way around a site, council offices and suppliers. Also, this is the first house that has been named. ‘Waldhaus’ is a play on the suburb that used to be called ‘Sechsenwald’. It was a forest (‘wald’) that used to supply timber to the Johannesburg mines.