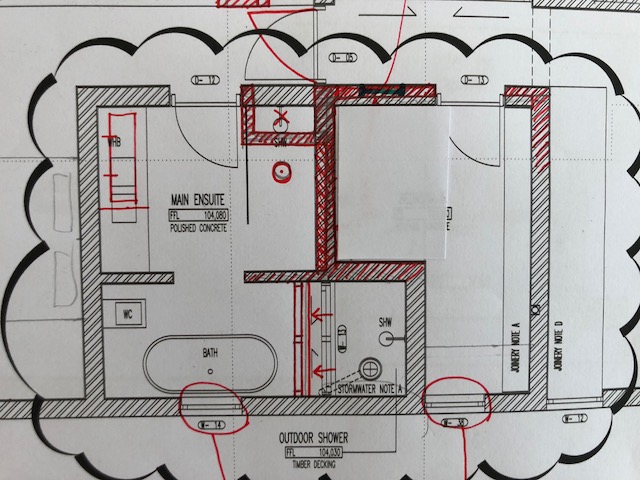 Today I did my normal site visit and stumbled on a huge problem with the slab form work. Slab, concrete, steel, stone – you know the saying…cast in stone! It could have been disastrous.

If, like me, you cannot afford to pay an architect hundreds of thousands of rand to oversee your build, you have to go and check it every day. Spend hours studying every detail in your plan. If you don’t, I assure you, no one else will have the time or desire to do so – including you building contractor.

Not only did I stumble on a missing part of the slab, but because I’d been spooked, I decided to go back later in the day to check on things again. To my horror, I find the plumbing team working with an old drawing from six months ago. This means they were laying the sewer and drain pipes in the wrong place – in concrete! Jack hammers can open up set concrete, but it’s a dog.

Last week I had a specialist slab subcontractor build the wooden form work that allowed us to cast the stairs in concrete. He was nearly finished when I tried to walk underneath. The height clearance was almost 150mm too low (enough of a mistake to result in you hitting your head ever day and not having your house passed by council).

Did he not think it was a bit strange, I asked? Did he not consider checking if this was actually correct? Nope, he’s working according to the plans and instruction his boss gave him (in this instance, the wrong plan). He knows stair building like you know the content of Netflix – it’s all he does.

Still, it’s a mistake to assume anyone cares or checks. (Offhand I know two people that have too low beams when you walk down their stairs. Somebody messed up, and by the time it was discovered it was too late to change it.)

This is how things go wrong. You make a change in May. You discuss it with the builder. He says, not to worry, we’ll get to that later. A month later it’s almost forgotten. In July you suddenly remember (because you keep checking) and formally alter the plan (a must), e-mail a copy to the building contractor, engineer and architect and think your work is done.

In August you start construction with that part of the house, but the external plumbing team that wasn’t on site earlier, never got the updated plan. And even if they did, you can bet your bottom dollar the guy actually doing the work on site does not see the e-mail feed and is working on an original print from 1998. So, trust is good, but check is better!

It’s a reality that the actual team doing the work on site never attend the formal site meetings, and certainly aren’t party to any e-mails doing the round. Their boss is working on four other projects and does not relay your daily instructions in nearly as much detail as you did. Things fall through the cracks.

On most sites in SA you are likely to have laborers from all corners of Africa – some of them don’t understand English at all. To expect a contract labourer, that earns minimum wage, to care as much about your detailed finishes as much as you do, is unrealistic.

This is why your drawings are your only international language. Make sure they’re detailed, 110% correct and regularly replaced on site with hard copies. (Architects use drawing registers to track all revisions and extra plans). Only E-mails is simply not enough.