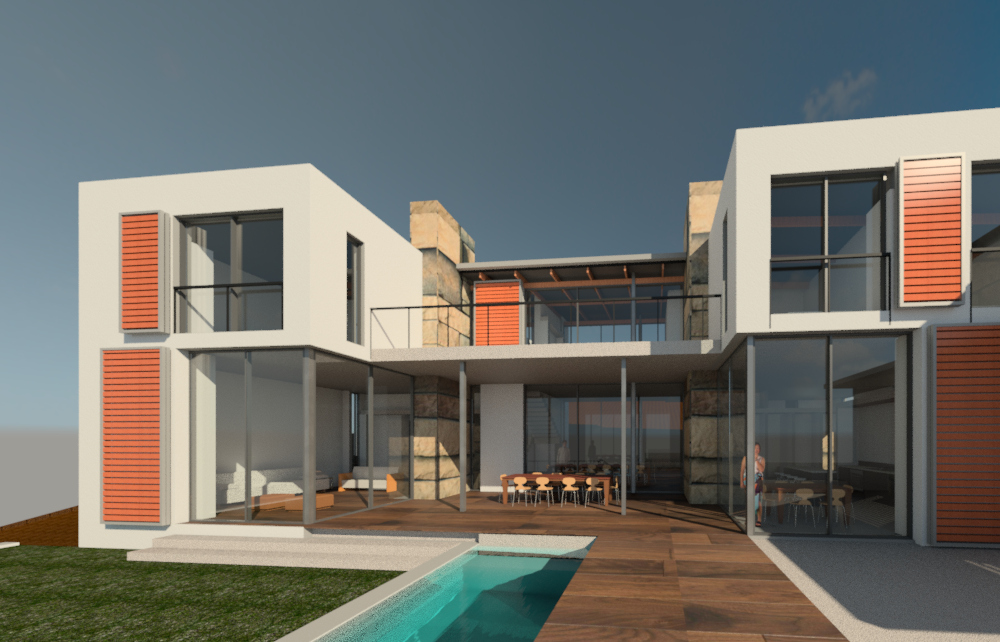 A large, mountain side plot with sweeping north facing views of the village and valley tempted us to attempt the third new build.

As the site literally bordered Chapman’s Peak behind us, the site was begging for windows on both sides to allow for a full scape of the views.

I hired a new architect Justin Cooke (www.architecturecoop.co.za) as I was keen to try a new style – flat roof and chunky walls. As this plot was outside of an estate, we were excited to not have the strict rules and building guidelines.

Alas! The Cape Town city council stumbled on an old photocopied guideline created when the suburb was created that stipulated building style and boundaries. As no new houses in the area had adhered to these guidelines, we had a case to ignore the building style stipulated.

Trying to keep within the allocated building platform did force us to be creative. As is often the case with building, obstacles can often lead to interesting solutions.

After three months of negotiation and tweaking we settled on a design that enclosed the central, transparent building with two, heavy wings and stone chimneys on either side.

Unfortunately, the computer generated model does not do the design justice, as you cannot appreciate the views and transparent aspect of the central living area. Large, hard wood shutters and sandstone columns would slowly integrate with the colours of the mountain.

We were about to start the building when life happened and my husband received a job offer in Johannesburg. As we were already in boxes and about to start a new school year, we decided to make the move.

The virgin landscape behind the property would have given this property a real ‘wow’ factor if integrated with landscaping and windows.

The lovely landscape came with some dreadful surprises – Cape cobras and puff adders by the dozen, hidden in the thick undergrowth.

The suburb guidelines were completely dated and suggested Victorian features with cottage pane windows. How it was passed in the first place is beyond belief and lead to some sleepless nights initially.

The plot was sold the following year, but unfortunately the new owners chose not to use the approved plans. I will never know their reasoning, but like I said, this particular house did not necessarily look good on paper.

To read more about the next project, click here.