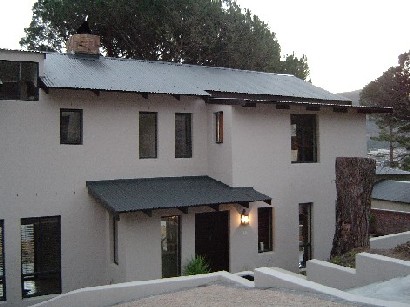 There is nothing like being presented with a blank canvas. We stumbled on a little, private estate against the mountain with sea and north views and decided to take the plunge.

We had distant sea views, but best of all, beautiful mountain vistas all around.

We hired the architectural firm that was involved in the estate development, and were assigned Rohan Young (www.youngarchitecture.co.za). From the outset I had very distinct ideas of what I wanted. I was inexperienced with dealing with an architect and brought lots of confusing references. Then I had to build up the confidence to reject the first design outright – not because it wasn’t good, but simply because it did not suite our requirements.

I’ve come to realise this can happen often if you have very specific ideas, which I do. To save time, I gave the architect a floor plan of what we hoped to get for our small budget and after some inspired tweaks and a basic set of drawings, we were on our own. (This is a model we would end up using almost every time. We simply do not have the budget to continue with an architect). We ended up hiring a work acquaintance to hand draw us the most basic council drawings. How it was passed, I don’t know.

Our budget only allowed for a 200m2 house, with very basic finishes. The first quote we received was literally double our budget. I remember leaving the meeting room, reeling with shock. About 10 quotes later we got a price closer to our budget. The builder was slimy, lived 50km away and – surprise, surprise – disappeared after casting wrong sized foundations. We had a collapsing wall of earth bordering our neighbours and things got stressful.

So this is the thing…things will go slightly pear shaped on any build. Preparing yourself for a few mishaps is crucial. However, most importantly, only hire a team that you get a good gut feel for and that has excellent references. Anything can be fixed if you have a willing and able team on site.

Shortly after, I found a lovely team to undertake the build. It was a fixed price, but we cut back on every possible addition. Our working drawings were of such poor quality, I had to be there every day to direct any details or measurements.

Eight months later we moved in and I remember the first night of ecstasy in that space, even though we were surrounded by a building site, no garden and almost no furniture. It is always worth it.

Not checking up on the plumbers when they laid the sewerage pipes. Tree roots got in the way of the necessary ‘fall’ pipes require to drain, and the labourers simply took the easy way out and left two pipes unconnected. Left a legacy of problems.

We put our heart into this build and it showed. It was more soul than high-end design, but we had minimal money and lots of ideas. Most of our friends will say that this was their favourite house, but it simply became too small for our needs, and I had become addicted to building something from scratch.